You most likely already know about Padre, the Perl IDE (if you follow this blog you do!). It's quickly becoming a great environment for beginners to learn Perl, and is already proving itself useful to some seasoned developers as well.

Recently, I talked about my Catalyst Plugin for Padre. It's also turning into a hit (yay!) and will hopefully help a lot of people doing web development in Padre. But Catalyst, amazing as it is, can impose a somewhat high learning curve for beginners, specially those not very familiar with (the also great) Template Toolkit and DBIx::Class.

This is where Mojolicious enters the scene.

Mojolicious is a next generation MVC web framework focused on minimalism and simplicity. It comes with the Mojo backend, a "framework for web frameworks". Through constant development and the tireless efforts of sri++, vti++, charsbar++ and several others, Mojolicious offers state of the art technology to deliver an environment where it is simple enough for beginners to get started, and powerful enough to just keep you going all the way.

Mojolicious is not a replacement for Catalyst, or vice-versa. They are just different approaches to the same problem and, although separately, both teams work very closely with each other (in fact, sri was -the- founder of the Catalyst project, and marcus++ is a channel op at #mojo on irc.perl.org). You should simply pick the one that best suits your experience and needs. And now you can do it inside Padre, too! 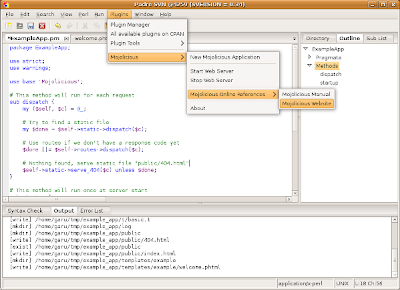 Padre::Plugin::Mojolicious incorporates helpers for Mojolicious inside Padre. Its behaviour is pretty much like the Catalyst plugin, letting you create new Mojolicious web applications, start and stop the webserver, and review some of the documentation.

Enjoy! And let me know if you have any suggestions to further improve it :-)
Posted by garu at 16:45